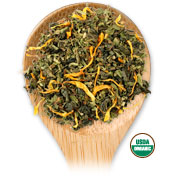 Today I’m trying a new tea vendor that although I’d known about them for a while now, I’d hesitated to spend money on.  Tea forté is a large online tea retailer and I’ve often spotted their products in Whole Foods and Plum Market. The price point is pretty high and they seem to focus a lot more on TeaVana-esque creative tea utensils moreso than their teas. Also, their website and the way they’ve mixed their teas also remind me very much of TeaVana. ^^;; It’s not good to prejudge though, so today I’m giving their cucumber mint a try.

I actually bought a sampler pack of their loose leaf teas that wasn’t too terribly expensive, though I’m not overly excited about the choices it offers: swiss apple, honey yuzu, cucumber mint, lychee coconut and cherry marzipan. Admittedly, I love lychee coconut as a bubble tea so maybe i’ll try that one iced. ;)

Cucumber mint is interesting I’ll grant you that. It has a base Green (though I can’t be sure which variety because unspent it looked like an oolong, but it unfurled into a tippy full leaf without a distinct taste, so i don’t want to hazard a guess). The cucumber and mint as well as blueberry is added to give it a spunky texture and scent. Cucumber mint is reminiscent of my beloved Cucumber White from TeaGschwendner (discontinued), but the mint really draws back the cucumber, and the Green obviously doesn’t have the same woodiness.  I don’t much care for the taste, which is dominated by a bland mint, but it is definitely interesting.