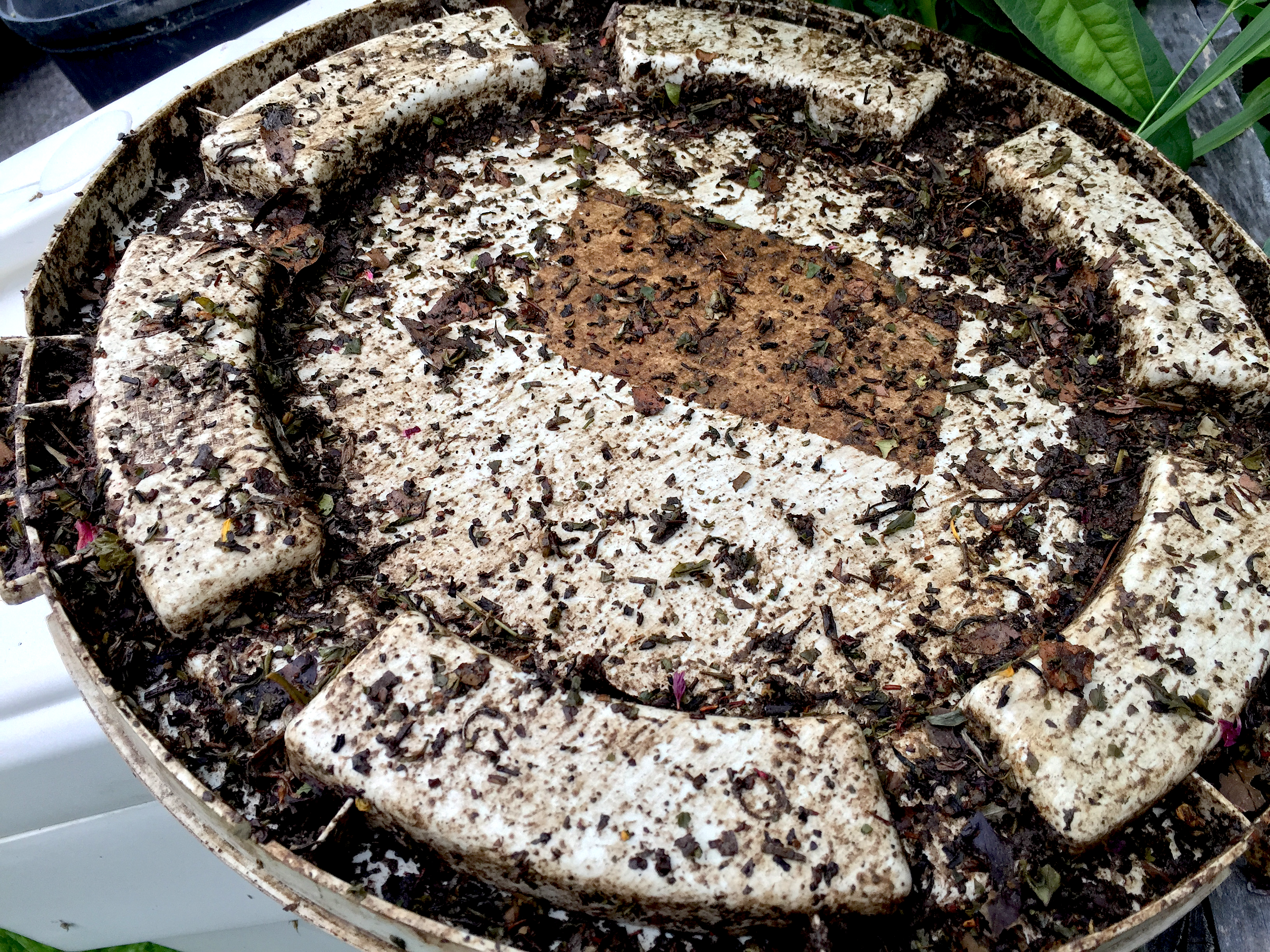 Apologies. This blog will come off reading very speechy/runon/fragment happy because I’m not really awake yet.

For years now (almost going on a decade) I’ve been using handmedown Tupperware to store my teas, separated by style to minimize cross-contamination. I say handmedown in that, when I was a kid my mother sold Tupperware as a living, and was very successful for around ten or twelve years. Afterwards my family accumulated a ridiculous amount of unnecessary salad crispers, colanders, salt and pepper shakers, tumblers of every shape and color imaginable, everything down to and including keychains made of Tupperware. All this excess storage equipage has really been a boon for me in maintaining tea shelf life. However, this preservation scheme is finally drawing to a close. The truth is, Tupperware is too damn big and cumbersome and captures too much air inside surrounding the tea. Fundamentally, tea is better kept in light-tight aluminum tins with no air gap. Tins may or may not be as modular and designed with as much space-intellegence as Tupperware, but I can definitely squeeze 200~ 1 oz tins into the same amount of room I’ve been taking up with the geospatial puzzle I’ve been struggling with everyday to contend with all this Tupperware.

In order to better organize and minimize the amount of teas I have in preparation for a new storage system I’ve devised, I needed to purge my tea again this weekend. I believe I last went through it all in March, but since then I’d been buying tea hand over fist and at least a 1/3rd of teas acquired in previous years just don’t fit well into the direction of my blog anymore. Additionally, I’ve reviewed dozens of teas since March and I needed to update my current tea list spreadsheet that was woefully out of date.

In addition to teas that had either died, been contaminated by air/other potent teas that had been mistakenly sealed with them, or that I’d wanted to keep the last time around based on what I’d paid for them, I ended up killing off pretty much everything that I’d already reviewed that didn’t receive a 90% rating or higher. Even should they cost $50/tin, there’s simply no way I can justify keeping teas I’ve already reviewed at the rate I’ve been purchasing them (unless of course I absolutely love them). So far I’ve only opened like six of the 45 Upton tea samples I bought in May, and since then I’ve added to my stock of Goldfish, Eli, By the Pound and TeaGschwendner teas, as well as started collecting Light of Day Organics. I was able to do a great deal of consolidation and re-working the temporary setup I have and rotating out the Tupperware that needs aeration (but really, who i am kidding, it needs purging itself). Hopefully the way things sit, the current system should be operable for another four~ish months, by which point I’ll have theoretically begun my new storage system.

After an enormous amount of research (which doesn’t seem like it ought to have been so difficult, except that I’m kind of one of the only people who would need to store quite so many small quantities of different teas without the intention of retail), I’ve finally landed on a two-tier methodology (90% 35 g/~1 oz air-tight tea tins & 10% 125 g/~4 oz silver mylar ziplock bags for odd sizes) I’m confident ought to work nicely. The tricky part is, deciding how many tea tins to buy. I can buy them in bulk, but they’re only discounted that way if you’re buying at least 288 and I really hope I don’t need that many. ^^;; At the outside, when I’m overdue for a purge I usually end up with around 220 different teas, not all of which would require tins since many come in their own or are just far too small to require one. I could buy 288 and have a bunch of extras, but that seems pointless and kind of the opposite of rectifying my space problems. As always I’ll just shrug and pay too much.

The really neat part of my tea purge this time around is that I simply dumped all the teas into my mother’s compost barrel-thingy. All told there was two full 1 gallon ice cream tubs full of nothing but loose leaf tea that went into the compost (she probably doesn’t need to know how many of those were produced with pesticides and herbicides…). Kind of ludicrous, but it makes me feel like I’m helping out with my mother’s vegetable garden (though perhaps not the planet). This batch will definitely make for some powerfully nutrient rich compost. xD