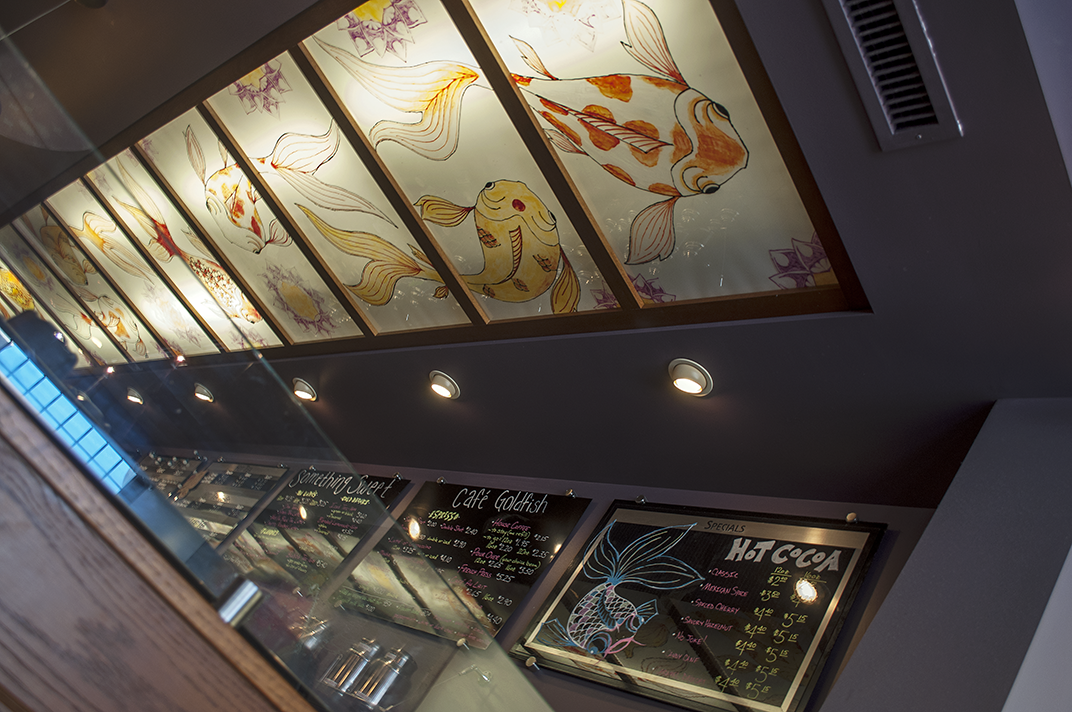 Two weeks back (I’ve been a little too depressed to write much at the moment) I finally made it out to Goldfish for the first time this year… and I had a blast. Unsurprisingly, I didn’t have access to infinite resources on this trip either, but I think I did well to keep my spending under $60 and come away with some really fabulous teas.

Small foodie aside/plug: When i first arrived i was recovering from a very filling lunch across the street at Ahan Thai. Ahan Thai is probably my number two favorite Thai restaurant in the state of Michigan. I absolutely treasure Thai food (easily my favorite cuisine) and at this point I’ve tried many of the Thai restaurants we have in South East Michigan. Ahan Thai is thoroughly delicious and their fried rice is easily the best I’ve ever tasted. If you like Thai, I highly recommend it. Plus, they have comic books. Sadly, i don’t think Ahan is rated as highly as many of the other places around Royal Oak (places i don’t care for nearly as much).

In order to better work through those calories, I wanted a high antioxidant Green tea, which I found in Goldfish’s Yip-Cha. There’s not a wealth of information available online about Yip-cha, except that it’s one of the most common Korean Green teas (one of the lesser refined teas, coming in third in global popularity after Sejak and Jungjak… and probably the most affordable one to be found in Michigan) and hails from Dong Cheon.  Yip-Cha is a delicate and flavorful Green. In overall taste and texture, Yip-Cha is mostly similar to a sencha, though probably not as homogeneous. Apologies in that none of my photos of the Yip-Cha came out (fairly embarrassing for me).

After shooting a few snapshots of the cafe (and some very creative tea humor advertising they had up on an placard on the sidewalk…), I started picking out the teas I would greedily bring home with me. I’m proud of myself that I didn’t simply buy everything that sounded good for a change, but engaged the staff in a deep conversation about their teas (which I’m sure brought them no end of chagrin) and was able to smell quite a few things. [I ended up with…]

After all that, it turned out I had 20-something minutes left on the parking meter, so I decided to sit down and enjoy a cup of one of the teas I didn’t select to buy in loose leaf: Dragonwell White. Dragonwell White is a robust Green that smells like a… dentist office? (definitely something unique anyway) and tastes like a woody Oolong. Dragonwell White definitely has some grit to it despite brewing to a White color (depicted below). From visual comparison and written descriptions, my best guess (remember there’s ~10,000 varieties of Green tea in China…) is that Dragonwell White is better known as Bai Longjing, which is a faux-White (specifically a Bai Pian). Devised in the 80s, Bai Longjing is supposedly a Green produced from a race of White tea trees (no clue how that might be accomplished without hybridization) in Zhejiang. By the way, if one simply searches for “Dragonwell White” on Wikipedia, the suggested refinement is “Did you mean: dragonball white?”.