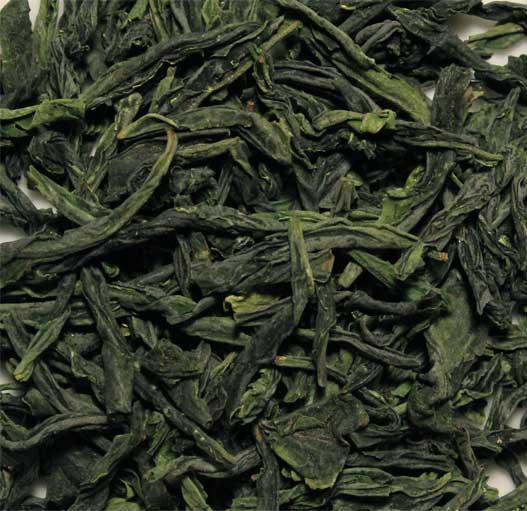 I admit, I feel sad when I see the words “Imperial Reserve” as the suffix to the name of a product that’s widely available in retail stores all over the world. Though according to TeaVana, it’s really an amazing accomplishment that we’re able to savor these exclusive teas once only enjoyed by the nobility of pre-modern China.  However, it’s not always that easy. Liu An Gua Pian cannot be purchased over the counter or in any current tea set TeaVana retails. I was able to put my hands on it last year about this time when I purchased one of their expensive (I think it was >$80?) once-every-other-year-or-so limited edition tea sets. This particular set is entitled The Forbidden Kingdom, Famous Teas of China set (although not currently available through TeaVana’s site, the Opening the Doors tea set is a close approximate), and as the name implies it contains 8 Chinese teas: traditional classic favorites as well as award-winning and formerly reserved solely for one or more (in this case at least three) Chinese dynastic courts throughout antiquity. I really enjoy the teas they’ve included in the Forbidden Kingdom set, especially in that all 8 are unadulterated by the many hard to avoid TeaVana additives.  Each tea comes with a brief description of its history or production. It’s a bit difficult for me to read the description for Liu An Gua Pian with a straight face, but here goes:

“Liu An Gua Pian in recorded history goes back as far as the Tang Dynasty, and was regarded in Luyu’s famous book The Classic of Tea. During the Qing Dynasty, it was expressed as being the ultimate green tea, becoming the subject of many poems. Enjoyed by China’s leaders for centuries, only the finest quality Liu An Gua Pian was delivered to The Forbidden City as a tribute. Its melon shaped leaves are uniquely rolled like no other, making it known as an “artisanal” tea. The roasting process for the leaves tends to produce a bold yet sweet, fragrant cup with a savory umami flavor.” >.> Ooookayyy, thanks… Well for what it’s worth, according to Wikipedia, Liu An Gua Pian’s millennia-spanning saga is historically accurate.

Liu An Gua Pian (六安瓜片) also known as “Lu’an Melon Seed tea” hails from Liu’an county of Anhui province. LAGP is a very delicate tea and must be brewed no hotter than 175º F. At its peak, LAGP has the scent of Hippophae (AKA sea buckthorn) alongside a mild Chinese or Japanese green.  The spent leaves cluster into a very beautiful wrinkled full leaf pile with an intoxicating fine green tea aroma.   The taste is somewhat reminiscent of a Dragonwell in texture (which is to say, it’s thin and seaweed like) though the astringency is definitely much higher, and it’s somewhat more sweet in palate like a White.  As you might imagine, the caffeine content is fairly high–I have migraine sparkles from just the first four sips. It’s not quite to the level of a Bi Lo Chun in intensity, but the thin water-to-tea ratio belies a full-bodied flavor. Maybe a kamairicha would make a close drink-a-like? Anyway, it’s delightful.