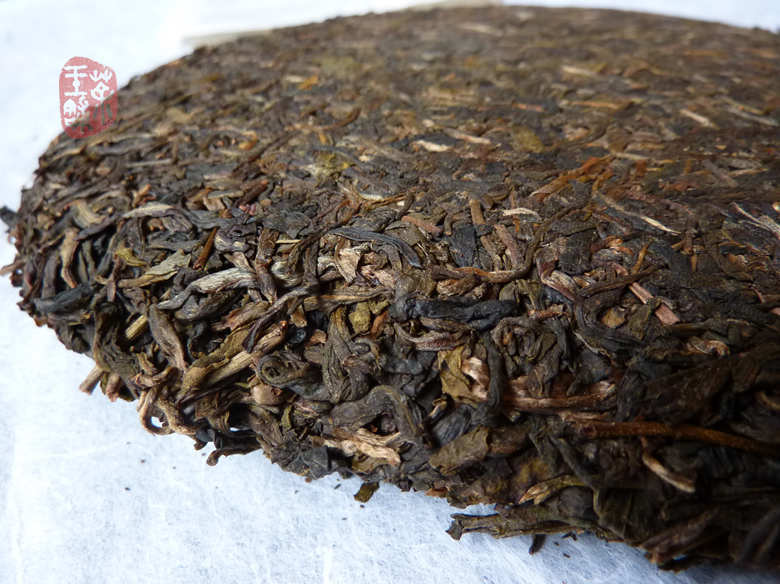 There’s seriously nothing I enjoy drinking more than a rare aged Pu-erh. I had been saving (more like intentionally forgotten about) this one for a while since Pu-erh is one of the only teas that actually grows finer with age. It looks like I should maybe put it away from another four years or more.

In aroma Nan Nuo Shan Imperial Reserve (not currently available, another rare Chinese tea that was included in TeaVana’s Forbidden Kingdom set) is a medium-strong dark earthy shou pu-erh (yes, I got all of that from a whiff, you can call me a liar if you want but… i’m not). Sadly, the taste is a bit more subdued than the aroma would lead me to believe. Nan Nuo Shan offers the taste impression of rich nitrogenated soil, but most of the flavor components are found in its aftertaste of warm toffee. Also disappointingly, in texture, Nan Nuo Shan is definitely geared toward an “uniniated-American” version of a Pu-erh. When i look closely at the spent tea, the color and patterning feels like this millennia-old tea was first planted in the early 2000s.

Made famous by Princess Wencheng as a dowry in 641 AD and granted as the “Divine Tribute to the Kingdom of Heaven” by Emperor Daoguang, this tea was chosen as tribute tea in 1839 AD. This eight year old aged pu-erh cake is composed of the youngest laf buds from Nan Nuo mountain, home to 1000 year old wild tea tree. The resulting brew is sweet & complex unlike the traditionally earthy tasting pu-erh. Tibetans exclaim “Better 3 days without food than 1 day without pu-erh!” People in the high elevations of Tibet believe their daily pu-erh ritual helps with digestion, lowering cholesterol and aids in reducing vitamin deficiency from their protein heavy diets.”