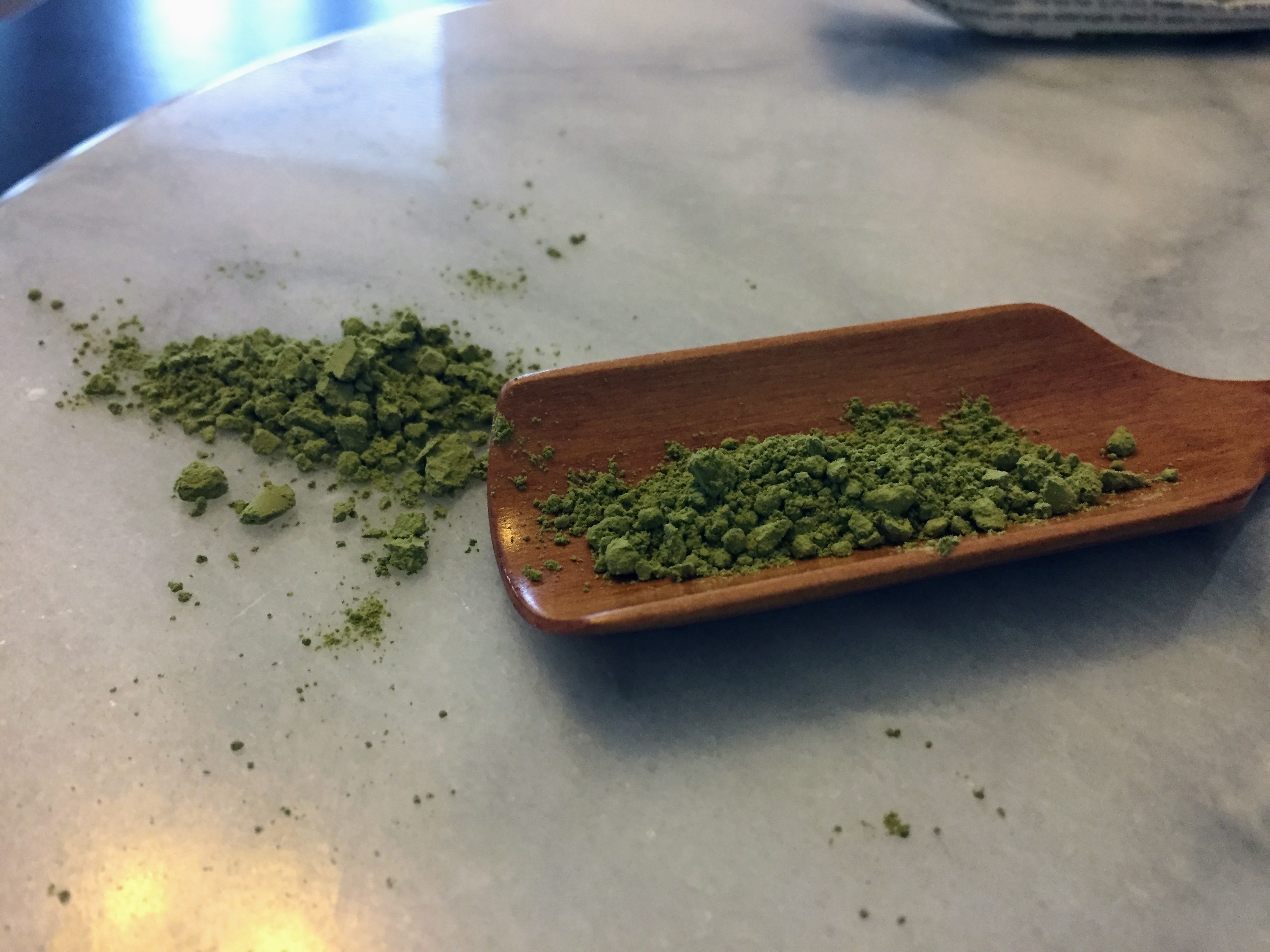 From the company that brought us such showstopping innovations as “Lady Cora’s Evening Tea”, “White Chocolate Peppermint tea” and the unforgettable “Hi Caf Caramel Black tea”, comes what might very well be their most shameless foray into naked capitalism to date…

It’s many health benefits not withstanding, the best thing about matcha is its taste. Even Mary Berry of The Great British Baking craze called it “distinctly very grassy”. Well, with Organic U•Matcha® Single Sips® Republic of Tea has attempted to bring the umami (and apparently the interpunct) to iced tea.

Naturally, being a product marketed to North Americans, the actual makeup is nothing like matcha. In fact, Republic has haphazardly added organic agave inulin and “natural flavor” to their take on this, the most painstakingly produced and distinctive terroir of all teas. Thankfully the agave isn’t overly noticeable, but its unclear exactly why they chose to use agave. Stevia is after all the hip new anti-sugar that at least would have had the virtue of being plant-like. My best guess? Like honey, agave is also quite gassy and may have the added benefit of declumping the wet matcha powder to some extent. Another more likely reason stems from the fact that Republic needed to use an inulin sweetener to get the matcha powder to crystallize and adequately infuse to room-temperature bottled water ala Crystal Light or freeze-dried Lipton.

That being said, the resulting matcha powder is a partially crystallized cooking grade, which is to say dense and cheap (and marketable by comparison to Premium and Ceremonial grades). U•Matcha’s consistency is reminiscent of what a well-whisked frothy, uber grit matcha ought to be, without really doing much of the work. A green so dark, Kermit would be jealous, the liquor is kind of a dirty toad green? Like any tea, its flavor will be assisted or inhibited by the quality of the water in solution. In this case I’m using rare and posh 1907 naturally alkaline Aucklandian ancient artesian aqua in order to really give it the benefit of the doubt (doubtless far and away outstripping what Republic’s target audience will be using). In aroma, U•Matcha has a Southern Plains States uncut lawn appeal; the aroma doesn’t really remind me of sencha, though is somehow still attractive. As, surprise surprise, U•Matcha requires a great deal of shaking to infuse correctly, it will have a bubbly head to deal with for many minutes of its peak drinking time (unfortunately adding to the difficulty in judging this monstrosity of a tea). In texture, U•Matcha is disappointingly medium grit with a coating mouthfeel that will have you running to brush your teeth. The flavor is matcha… which is to say it is the Americanized “matcha-flavored” ice cream or chocolate cake adulterated wannabe umami; as unlike its subtle bitter namesake as Hot and Sour soup.  As an iced tea, U•Matcha is probably a wildly successful top of the line product. As a matcha, “laughable imitation” is too high praise.

I did try reheating U•Matcha to a regular matcha temperature, but sadly the results were painfully undrinkable. That in itself doesn’t come as much of a surprise: in my experience, if it’s designed to be an iced tea, that’s usually all it can ever be.

Although U•Matcha ought to come across as another wake-up-screaming cultural appropriation nightmare (I’ve often thought there was something unsettlingly colonial about the name “Republic of Tea”…), i come away with a feeling more akin to an eye rolling “Buh”. After all, the former would require it to actually resemble the original in some fundamental way.