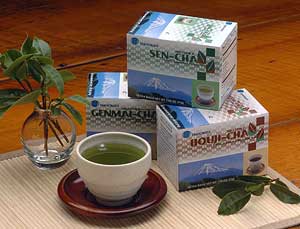 To contrast the nearly-indistinguishable-from-real-sencha I recently reviewed, today I thought I’d touch on the qualities of an authentic sencha.

Takaokaya isn’t a brand I’ve spent much money on, even during the height of my Japanophilia in the years following my short jaunt to the archipelago. I’ve seen it on store shelves in world and Japanese grocery markets, but it’s fairly cheap and comes in bagged large quantities–I generally shoot for smaller, higher quality batch teas. Today I’m drinking it because it was compliments of the University of Michigan’s Center for Japanese Studies lecture series, which held their last lecture of the semester today.

To be sure, Shizuoka Sencha is about as Japonica a green tea one can come by without spending a great deal. Shizuoka is the traditional and much revered tea growing region of central Honshu. It produces the vast majority of tea consumed and exported from Japan; I would utterly love to someday visit a Shizuoka tea plantation, but that’s a little beyond my means for the next decade plus.  Takaokaya’s Sencha is a slightly more roasted (that is to say, more Hojicha-like), Green with a medium antioxidant content and low astringency. It has a mild caffeine palette and a thin, vaguely matcha-powder like aroma, and a burnished amber color (if steeped for more than the one minute that’s usually called for). I don’t have a full-loose leaf style to review, only the bagged, but even so it’s highly drinkable: the low astringency, slightly roasted texture makes it deceptively easy to drink, but watch out for the caffeine if you start downing it like water, which is hard to resist. Takaokaya is a prominent producer of cheap sencha within the Japanese market and if brewed the way the Japanese would (thrown in a ceramic pot with hot water and poured out unfiltered), it’s definitely strong enough to satisfy.