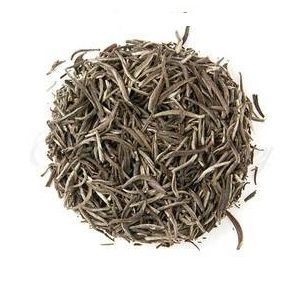 …and I managed to already forget my own domain.

Well, okay, not really. My excuses are: i sort of have a searingly bad headache just now and I’ve gotten too used to typing “sen…” and have Chrome auto-file the rest of the address to take me to my blog. Now that I have a real domain that costs cash money, i guess i should probably use it huh? ^^;;

“Elephant Tusk” is a Kenyan private estate Silver Needle I found at ChocolaTea. To my knowledge, there’s also a very similar sounding “Elephant Tusk Silver Needle” produced more broadly to the South in Mulanje, Malawi (though I haven’t tried it yet for comparison). Silver Needle is easily the most well-known White tea. Honestly, I can’t say why that might be except maybe thanks to some marketing campaign in the past I really couldn’t point to. One thing that does distinguish Silver Needle from other Whites is its delicate, powdery, almost feathery silver leaf tips. Generally Silver Needles have a goodly amount of antioxidants though lesser mouth than their more leafy Whites cousins. Since it’s usually quite tippy, (Chinese) Silver Needle does tend to have a more refined aroma.

Elephant Tusk is perhaps more powdery, in taste, texture and aroma than other Silver Needles I’ve sampled. Not really a huge surprise though, since several other African teas I’ve tried, such as Bushman’s Skinny Tea, are also heavily powdered. In aroma, Elephant Tusk is maybe more dully herbal than its Asian counterparts, but its hardly a detractor. There are some uber expensive Silver Needles out there which, if I’m being honest tend not to be worth their price tag. Since Elephant Tusk is more exotic than your average Chinese Silver Needle, and retails for only $11 USD, I’d call it a fair trade… or, well, I would if I knew for certain that it is Fair Trade.